In the midst of a transaction, a White Castle cashier takes a customer’s $20 bill and stares intently at Andrew Jackson’s portrait.

As if frozen, the employee continues to stare at it.

And stares at it…

Besides the confused contortion of his features, the customer watches the employee without reaction…for five minutes.

The customer doesn’t utter a word. The employee stares at the money. It’s a five-minute stand-off. It’s also the kind of hidden camera pranks that are the crux of TruTV’s Impractical Jokers. 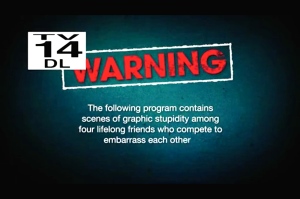 “WARNING: The following program contains scenes of graphic stupidity among four lifelong friends who compete to embarrass each other,” proclaims the narrator in the opening sequence.

Staten Islanders, Sal, Q, Joe and Murr of the improvisational troupe, The Tenderloins, are now gaining more fame with a comedic formula that often plays off of bending social norms. Many of their “challenges” involve them assuming roles of everyday folks such as cashiers, doctors and customers. The other three guys are in another room watching them and they direct their friend who has to “do and say what (they) are told and if (they) refuse, (they) lose”. Their wins and losses are recorded throughout each episode and the overall loser has to meet an ultimate challenge at the end of the half an hour. The directives are often to interact with strangers in unexpected and uncomfortable ways.

My expertise in sociology may not extend past being a people watcher, but often the skits seem to be unintended social experiments. The challenges are generally unembellished acts such as a Joker attempting to be welcomed at a strangers’ table after they have already crashed it. Besides watching the show’s stars approach uncomfortable situations, the entertainment is in how many of their “targets” either laugh or hesitantly react. In Sal’s turn at the table challenge, he joins a groups of girlfriends and engages with them as if he had been invited. Besides a doubtful expression on one woman’s face, the women go along with him as he boldly chats, snags a slice of their pizza and orders a glass of wine for himself. That was a thumbs up for Sal.

As simple as it is, that’s sometimes the simple charm of the show to see folks befuddled when one of the Jokers interjects their antics into a mundane situation. Many of us are exasperated by just about anything that interferes with efficiency and have perfected ways to ignore folks in public, but the Jokers’ simple stunts can even throw off a New Yorker. People seem to have a reserve of ingrained responses to many occurrences that may be unacceptable such as a calling over a waiter when we receive the wrong order. But what do you do if the dental hygienist tilts your head upside down in the chair and walks away? Apparently, not much.

Obviously, I am oversimplifying the reactions and ignoring that the magic of TV editing may play a part, but Impractical Jokers, to me, is a lighthearted form of social experiment. It’s a fun, half hazard study of boundaries.

Watch the show and share your feedback in the comment section. But, if nothing else, you can prepare yourself in case Q, Sal, Murr or Joe sits at your table.