Central Park is an outdoor getaway for New Yorkers. I hesitate, though, to call it an oasis; it’s difficult to actually escape the crowds, and sorry, folks, the tourists.

But its’ spacious enough that we don’t have to elbow our way through it like Times Square. Maybe just dodge a bicyclist or two.

There is so much to do – play, lay out, watch a concert, cheer on sidewalk dancers, go to the zoo or visit the Beatles fans’ mecca, Strawberry Fields – and so many ways to cover the broad expanse.

Neither of us had ever opted for the rowboat, so my friend and I rented one for an hour at the Loeb Boat House as part of our mini end of summer excursion. Fifteen bucks bought us an hour on the lake with the sun on our backs, blue skies and green waters…

I was going to research what gave the lake its soupy green color, but ignorance can be bliss. What I do know is that we could not see the paddle beyond the surface.

Hey, it was cheaper than the 35 francs my husband and I spent for a paddle boat in Switzerland with its view of the Alps and the blue water… In fact, we were even treated to some New York hospitality when one of the attendants barked at the line of patrons.

Once we climbed into our boat, another attendant pushed us off and then called for us to turn and smile for prosperity’s sake – and a photo we did not buy. We took a leisurely spin a bit beyond the picturesque Bow Bridge admiring our city rising above the greenery while deftly (ok, mostly deftly) maneuvering around our fellow boaters.

On the other hand, if you’re apt to vigorously row like my brother and his Navy Seals friend, you can actually cover the entire length within the hour. But, for my first rendezvous, I was just glad that I was not playing bumper boats.

But next summer, kid, the race is on! 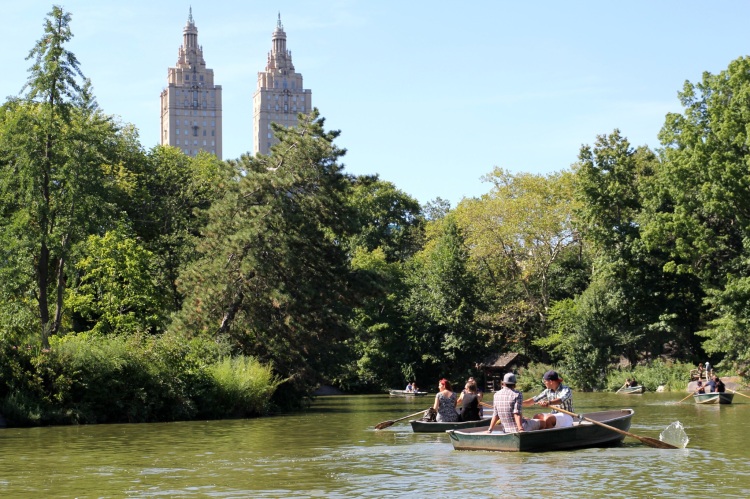 2 thoughts on “Focused on the Backyard: Rowing Through NYC’s Central Park”