In our series on female leaders on the environment, we look today at Rachel Carson who ironically died from complications of breast cancer two years after the publication of her landmark book on a well known carcinogen.

In 1962, Rachel Carson angered the chemical companies when she wove environmental and health concerns in Silent Spring. In it she exposes the little known effects of a very common chemical on the health of humans and the environment. Although dichlorodiphenyltrichloroethane (DDT) was fabricated in the 19th century, it was not until the Second World War that it was recognized as a very effective pesticide. In fact, DDT was so successful in killing insects that it had achieved widespread success in agriculture and to manage pests that carry such diseases as malaria and yellow fever.

In its seeming ability to create miracles, long-term affects were ignored and companies such as DuPont pushed its prevalence; there are photographs of children playing in the mist of DDT sprayed from trucks and there are vintage advertisements that includes an image of DDT-laced wallpaper in a nursery.  According to Duke University, 220 million pounds of DDT was manufactured at the height of its popularity in the United States. Although it was another decade before the federal government truly banned the use of DDT, Carson was successful in breaking the popular silence on pesticidal dangers.

Not only have birds died from it (hence the clear warning in the title), but neurological, autoimmune disease and cancers in our species have been attributed to the compound. Though DDT has been banned in the U.S., its impact persists today; it is still used in tropical nations to combat malaria and its effects still linger in the states some 30 plus years later.

Robert K. Musil discusses Carson’s journey to writing the book and the people -particularly women- she worked with along the way in the book Rachel Carson and Her Sisters. These women were not only instrumental in her writing Silent Spring but in also helping her find a wide audience for the book rather than have her pigeon holed as a “crackpot” (despite the FBI surveillance she attracted through one of her acquaintances). The story behind DDT and Silent Spring, should serve as a cautionary tale on what may be lurking in the products we nonchalantly consume today. Mickey Mouse DDT-laced wallpaper may seem insane now but think of all the things that are laced with the power of antibacterial substances.

Good-bye, bacteria; we hail the power of sanitizing, but are we just awash in more silence? If you have any female environmental leaders that we can research for the series (global to super local) or any information on toxins common in today’s products, please comment below. 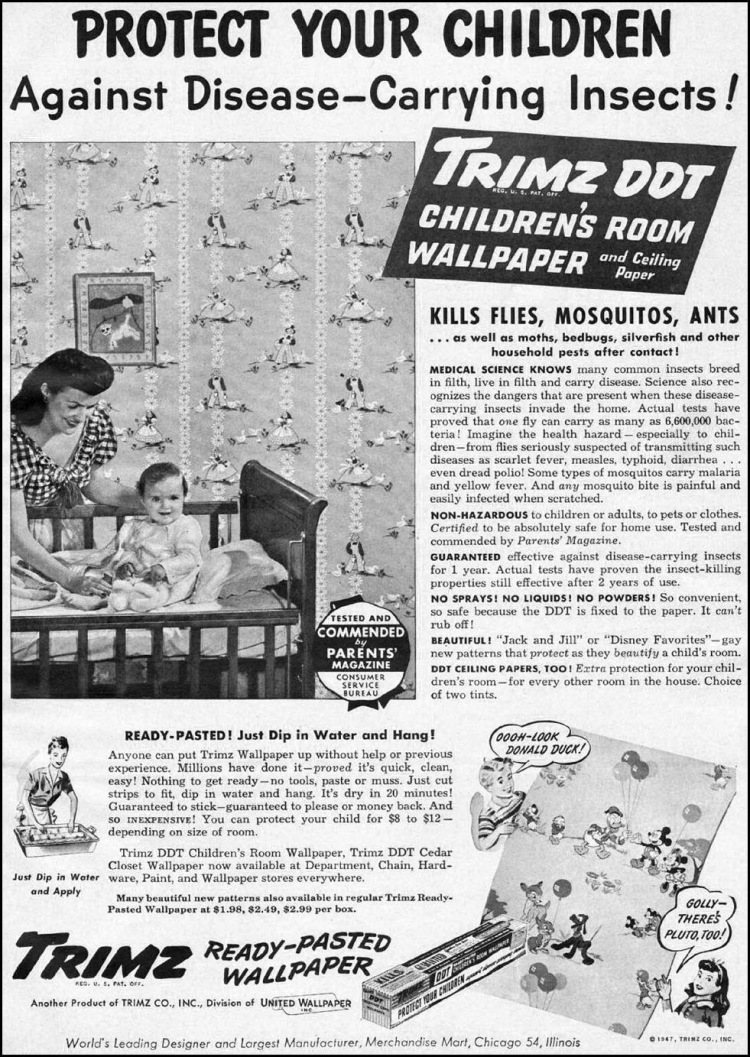 2 thoughts on “Inconvenient Truths of a Silent Spring”