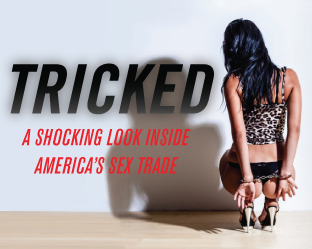 Sex can be a taboo conversation as it is…so how do you get people to open up about their experiences in a sex industry fraught with illicit activities, shame, denial and fear?

Director Jane Wells shared a bit of her approach and experiences in interviewing prostitutes and pimps for the documentary, Tricked.

3generations tells vulnerable people’s stories by encouraging them to tell their own stories. Allowing folks to be the “authors of their story” along with maintaining ongoing relationships has helped the nonprofit to build trust and mitigate exploitation.

For instance, Wells has known Danielle, a former sex trafficking victim, and her family for 5 years. In Tricked, Danielle details her experiences from the time she was trapped into the life by a man who had “boyfriended” her into it just after she started college. She explains that 2 weeks after the man had wined and dined her, “he pulled (her) into an alley and beat the shit out of (her) and said ‘get in the f…ing car and make my f…ing money'”.

One of the film’s anti-heroes allows himself to be taped face on, “We can duck the question, but all women are either a prostitute or a whore”. The pimp goes on to draw a simple line between those who engage in sex for money and those who engage for free.

Whether they conceal their identify or not, the pimps profiled in Tricked are forthcoming.

They speak frankly about how they seek out women for their trade or the price of “pussy”. A Chicago pimp is so bold as to reframe his work with his prostitutes, “I just considers myself as a good person to these girls…cuz I’m gonna help with their babies, I’m gonna help these girls out with so much stuff you wouldn’t believe”.

Although Wells admits to some bias in editing footage on the pimps, yet, in allowing them to also be “the authors of their story”, 3generations enables us the opportunity to hear what is implied in many of their circumstances. Though Wells does not excuse their crimes, she does recognize that many of them have carved their existence out of poverty and a lack of opportunity.

I believe she would agree that she was surprised in the “compassion” she found for these disenfranchised men.

Speaking to one pimp, a man of color, off-camera, Wells casually asked him if he felt good that there was an African-American President in the White House. He looked at her and told her he doesn’t vote. As a Brit, Wells was not aware that convicted felons in the States are officially barred from the democratic process that we take for granted.  “That’s tragic,” she lamented.  And, so, the “Obama presidency means nothing to his daily existence”.

An “Endless Sequence of Story”

3generations even finds dimension within the antagonists in their documentation, and, many other narratives beyond each film.

“There are many, many other stories in a film like Tricked,” Wells told me; it’s an “endless sequence of story that I think needs to be told.”

In fact, 3generations has already shared the next story, Native Silence, which focuses on the “legacy of forced adoption on Native American children, torn from their tribal communities and placed in foster care and boarding schools”.

Whatever their subject they document from here, 3generations will be sure to help break the silence and “demand change”.

3generations is a non-profit organization whose mission is to amplify the story of survivors through film “…as an act of healing and a call to action”. 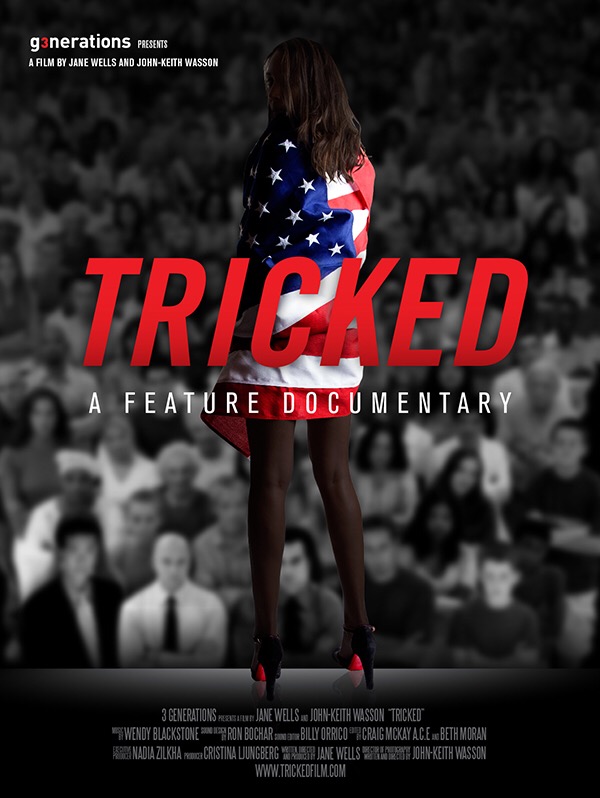 The sex industry is complicated but it can often be looked at through this one word.

It’s also an apropos title for the 3generations documentary on sex trafficking.

I was fortunate to meet Jane Wells, producer and co-director of Tricked, at the Montclair Film Festival screening this past April and spoke with her recently regarding her impressions on how to address the sex trade and her approach to the subjects in the film.

The sex trade is expanding; there is a greater demand for the product, and therefore, victims. The FBI identifies it as the most common form of human trafficking with victims in the millions domestically and internationally, “It is the fastest-growing business of organized crime and the third-largest criminal enterprise in the world”.

“It (sex trafficking) is the fastest-growing business of organized crime and the third-largest criminal enterprise in the world”. -FBI

Wells surmised, “It’s a lot easier to sit on your computer in your office or your home and go online and make contact with someone than it is to get in your car and drive to a certain side of town…and worry about who might be seeing you. I think the privacy that the internet affords is a big factor in allowing more people in accessing sexual services.”

The catch 22 is that the ease of access arouses more demand as even more folks get a taste for it.

Slowing Down the Traffic

Being that prostitution is, as they say, ‘the world’s oldest profession,’ it’s a difficult problem to solve. With their films, Wells says that 3generations is attempting to counter the broader culture’s impression of prostitution, “…that says ‘its a victimless crime, that most of the girls are doing it by choice…'” and it’s “‘…2 consenting adults doing something completely normal and natural'”.

The prostitute that is acting completely out of free will is truly a rarity and Wells stresses that “…if you are a john and you are purchasing sex you cannot know, you will not know whether the person you are purchasing it from is under pimp control or not because there is no way you really can know.”

It is highly unlikely that a sex worker will confide expose their circumstances because the pimps contain them by instilling great fear and brainwashing their workers so “…their goal is to get money from the john to look like they’re enjoying it because that’s going to be productive and get it over with as quickly as they can by looking happy and content.”

Although many experts recognize that punishing the prostitute – the victim – is neither an effective or fair option, people cannot agree on what is a viable alternative.

Some European countries, such as Germany and Holland, have attempted to stem sex trafficking by legalizing prostitution. The legislative intentions are to allow men and women who are freely selling their sexuality to lead the market, but Wells questions this logic of making exceptions for the minority of sex workers that “…allows for the exploitation of the majority”.

Apparently, she’s right; legalization has exacerbated the vicious cycle of trade. According to Wells, there has been a significant increase in trafficking and author Lydia Cacho asserts that nearly 50,000 African and Latina women have been trafficked to Germany and Holland.

Alternately, nations like Sweden, have made the opposite move with greater success. They have kept prostitution illegal, and have criminalized the purchasing of sexual acts as opposed to the selling.

As you may imagine, finding your way safely out of ‘the life’ and reestablishing yourself in mainstream society is a feat that is complicated by numerous factors and necessitates great supports and strength.

One woman that Wells had spoken to for Tricked had insisted that she freely chose to be a prostitute. A few months ago, Wells learned that the woman had finally recognized that she, indeed, was brainwashed while in a transitional program.

Another story that Wells recounted was of a young man that she had interviewed who, for lack of services, was trying to process his experiences via social media. Through her Facebook feed, Wells assumes that he must spend hours everyday sharing information on prostitution and trafficking with an informal network of survivors.

At this point, though, there are less than 100 beds for female survivors and there are even less, if any, services for male victims within our 50 states.

Often, female victims will end up in places like battered women shelters as they try to move away from the life. Although it may seem a good enough roof for them to find reprieve under, former prostitutes do not receive the specific supports and understanding that would be available in a dedicated service.

To contend with possible years of brainwashing and trauma, these victims need to build up new methods of trust, self-esteem and functioning in the mainstream. According to Cacho, survivors of the sex trade, among other things, need full-time mental and physical health specialists, security, housing, nutrition, legal and immigration assistance. In the United States, she cites the Girls Educational & Mentoring Services in New York as a model organization.

In the words of the Californians Against Sexual Exploitation (CASE) Act organization website,

“Human trafficking deviates from our historic view of slavery, making it hard to conceptualize. But ultimately, slavery today and 200 years ago share the same notion: It’s the notion that one person’s life, liberty and fortune can be under the absolute control of another, and be sold, bought, or used at the will of the owner”.

So the ‘home of the free and land of the brave’ is still not rid of slavery, it just has a new look. On the FBI website, there is this headline, “It’s sad but true: here in this country, people are being bought, sold, and smuggled like modern-day slaves”.

Not in my backyard? Who can tell?

Visit Tonight at Dawn for a follow-up article on the making of Tricked.

3generations is a non-profit organization whose mission is to amplify the story of survivors through film “…as an act of healing and a call to action”.  Their most recent release is Native Silence, a “solemn account of the legacy of forced adoption on Native American children, torn from their tribal communities and placed in foster care and boarding schools”.