Madeleine Albright, the United States’ first female Secretary of State, was also the first speaker in Fairleigh Dickinson University’s New Jersey Speakers series, “seven evenings of diverse ideas and thought-provoking perspectives on a broad range of issues from some of the best and brightest minds of our time.”

Although Albright was a fantastic inaugural choice and I am excited that the series will bring other celebrated folks into town such as actor Alan Alda and historian David McCullough, I hope the second annual series will go beyond diverse ideas and add more diverse voices to the ticket. 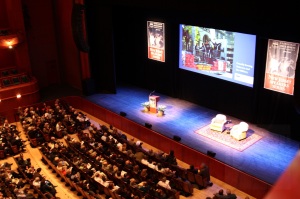 “The world is a mess,” the former Secretary of State quipped, “and that’s a diplomatic term.”

Madeleine Albright knows it is difficult to make sense of international affairs, but with a keen perspective and a bit of levity, she provided insight into our complex global situation at Newark’s New Jersey Performing Arts Center.

As Albright no longer works for the government she did not need to censure her perspective on Thursday night. She exemplified her freedom of tongue by sharing her untempered view of Vladimir Putin, “From the moment I met him, I did not like him” (and she had no problem sharing that the feeling was mutual).

On the other hand, she did not stray far from Uncle Sam or the party line; Albright, among other things, spoke of her belief in “American Exceptionalism” and an uncritical support for President Obama’s recent strategies towards the Middle East.

Regardless of allegiance, Albright is no stranger to international messes. From fleeing her birth city, Prague, as first the Nazis and then communism took hold of it in her childhood to serving as Secretary of State under President Bill Clinton, she has a rare depth of experiences in foreign affairs. So, when she says the world is a mess, I am listening.

To the retired Madam Secretary, Russia’s recent annexation of Crimea, the first European nation to employ such an act since the Second World War, and the breakdown of arbitrarily drawn political boundaries in the Middle East lie at the heart of the world’s destabilization. These events are playing out in a unique period in humanity and Albright likens the twofold impact globalization and contemporary information technologies on such crises to a cue ball breaking a set of billiards balls, “trouble spreads beyond is original source in unpredictable ways.”

Global Village vs. the Village?

Yes, globalization has boosted mutual awareness and appreciation of cultures around the world but it has also heightened fears of a world without borders and precipitated complex domino effects.

For all of the increased connectivity between peoples, Albright recognizes that some groups fear they will be “left behind or pushed aside by forces they don’t understand or faces they do to recognize,” which leads them to “…cling ever more tightly to ethnic, religious and national identifies that separates ‘us’ from ‘them'”. Albright cited the resurgence of Russian nationalism, far right parties in countries such as Greece and the Netherlands that are intolerant to folks from different backgrounds and secretariat divides in the Middle East as examples of the ugly byproducts from the global village.

Moreover, globalization compounds complex issues by restraining international responses. In order to support Ukraine, Europe and the United States have collaborated on economically sanctioning Russia, but this results in a catch 22 in our tangled world because “everything affects everything”.

Exerting pressure on the Russian economy can cause a negative ripple effect on the health of the London financial markets and Turkish energy supplies while possibly instigating the Russian government to retaliate on its closest neighbors.

“You cannot simply tweet yourself to democracy, prosperity and peace.”

Albeit the unparalleled access to information that new technologies afford us, Albright asks “…is it making us more civilized?” Technology may give rise to new opportunities and easily connect masses of people, but it can just as easily create problems.

Albright pointed out that the news “onslaught” of the digital age lends us to customize our information feeds to such an extent that it leads individuals to narrow and harden their worldview within the self-made echo chambers. The danger is, she contends, that it will make it impossible to appreciate opposing viewpoints and, therefore, will render compromise impossible. She is also concerned about governmental response to the constant light-speed spread of information and misinformation; she sees that our leaders often are reacting to the next headline while “…losing sight of the longterm”.

“How do people get from Tahrir Square to responsible governments?”

Albright also acknowledged the powerful role that social media has come to play in protests around the world, but questions what it does for the populous after they have risen up, “You cannot simply tweet yourself to democracy, prosperity and peace.”

Additionally, Albright sees the dark side to proliferation of information, “We’ve all seen in real-time, in high-definition, the growing chasm between the world’s have and have-nots.” Am I right to assume, Madam Secretary, that you are concerned about the unrest that may lie in the wake of the “great chasm”?

We, the People, are Tired

“I firmly believe that the United States is the indispensable nation.”

Albright may not believe that the States should be a solo actor, but she certainly still maintains the greatness of the American immigrant vision.

We Americans may be weary of endless military engagements but Albright believes that we still want our leaders to offer nation’s assistance where there is need in the world.

In spite of a fear that we will over-extend ourselves, Albright asserts that we cannot let it inhibit us and we must lead our fellow nations when the need arises while minding our limits. She asserts we must do this for not only our global neighbors, but to also protect ourselves by preventing situations from arriving on our soil as on September 11th.

To her, this lesson lies in the 20th century.

For most of her life, Albright has mulled over the idea that World War 2 may have unfolded differently had Great Britain and France contended with Hitler from the onset of his aggression. She quoted Prime Minister Chamberlain, he “wasn’t prepared to risk war because of the quarrel in a faraway country between people of whom we know nothing”.

As we know now, Chamberlain and his French counterpart only managed to delay war. In researching her book, Prague Spring, she learned that the reluctance was rooted in exhaustion from the preceding world war. Unfortunately reluctance ultimately gave birth to great destruction and loss of life across Europe.

We are weary, but how great is great? 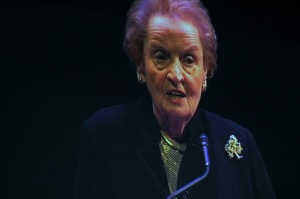