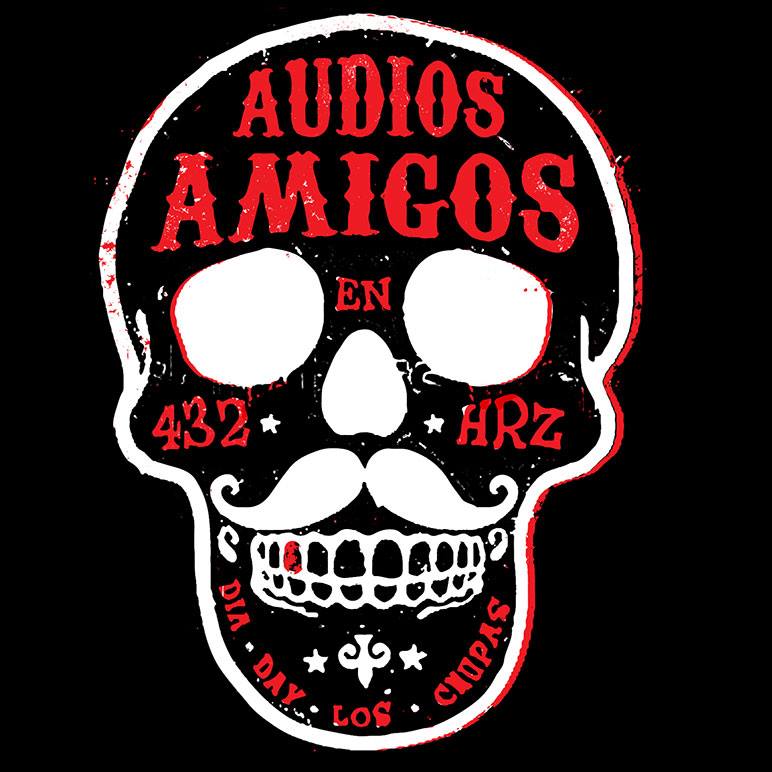 A band that blends instrumental surf, country, latin, soundtrack and garage music (all while wearing mariachi-inspired attire, no less) can be a tough sell for us rock and roll-leaning individuals, but when that band is AUDIOS AMIGOS, consider this guy sold.

Having released several E.P.s of original material mixed with faithfully covered classics,  Audios Amigos is a band that can get your booty shaking one minute, than transport you to the set of ‘A Fistful Of Dollars’ the next (it’s enough to make composer Ennio Morricone well up with pride).

Band members JT Halmfilst and Eric Baldoni were more than gracious enough to put up with my nonsense and answer a few questions.  Read along as they reminisce about the origins of their name, the beginnings (sot of) of Red Fang, talk about future projects, and discuss the current state of Portland sports clubs.

KralTunes: First off, GREAT name for a band!  Do you ever feel like you guys hit the  jackpot in coming up with it before some crappy, NICKLEBACK style band could?

JT Halmfilst: Yeah, I feel like we’re pretty lucky, band names are kinda hard to come by, they’re either taken or terrible or both. I had actually used the name (Audios Amigos) for a one-off benefit show featuring members of Dusty Santamaria & the Singing Knives and Dramady. Months later when we were forming this band, I thought it was too good to remain in obscurity and it fit our m.o. You know, “Sound Friends”. It does unfortunately get misspelled often, which is the price we pay for being so clever.

Eric Baldoni: I was pushing for “JT and the Skankin’ Yankees”, but apparently that last part is already taken. It’s generally a good thing no one listens to me.

KT: Whenever I think of the Pacific Northwest music scene, hard rock bands like Red Fang spring to mind. Is there a Portland surf rock movement the rest of the country all are being deprived of?

JT: There are a great many instrumental bands in and from the Northwest, one of the greatest being The Ventures! Others include Guantanamo Baywatch, Don & the Quixiotes, The Boss Martians, Satan’s Pilgrims, Surf Trio, The Diminished Men. We like to play with an array of bands, mixed bag shows and whatnot. Not even I who happens to love surf/instrumental music wants to hear an entire evening of it! Every once in a while we will share the stage with our surf rock arch rivals, the aforementioned Don & the Quixiotes, but usually prefer to play mixed bag shows, variety being the spice of life and all. Funny you should mention Red Fang, we’ve actually opened for them! Technically
we opened for the comedian Ian Karmel, who was followed by Red Fang. That was great, their fans were really nice to us.

EB: We’d most likely be an anomaly anywhere. Incidentally regarding those Red Fang rock stars, I knew Bryan way back when we both played in “punk” bands in Tucson (late 80s). Not only is he a great guitarist, he also is the original Buckethead. I say this because he once was featured in a performance by the incredibly obscure yet monumental band Slo Deluxe, wearing a metal bucket over his head equipped with a contact microphone into which he was instructed to scream. Come to think of it, that sort of encapsulates his guitar style…so the world owes the existence of Red Fang to Slo Deluxe. 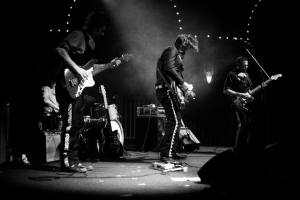 KT: I love the moody spaghetti western feel of your music. What drew you all to this sound?

JT: I’ve just always loved cool sounding guitars, 50s & 60s
instrumental, cinematic/soundtrack stuff. The way they made things sound is so evocative and imaginative. In a song without words or singing, you kind of end up making up what it’s about or creating your own imagery. This band is a great opportunity to show our influences by playing songs by them. Joe Meek, The Ventures, Link Wray, Ennio
Morricone, the music of David Lynch and Angelo  Badalamenti, Davie Allan and the Arrows. There is also South American music from the 60s called Chicha that is similar to cumbia, but played with wah wah pedals and Farfisas that is real fun to play, or try to! This is the first band of this kind for me and I’m happy to finally be playing
these styles that ive loved for so long.

EB: I like everything odd and weird about the Morricone compositions…he used so many strange instruments to create mood. Our influences, inspirations…geez just too many, especially with the internet making available so much old music that otherwise would have been impossible to find. Personally I started out playing in weird punk bands, then a complex short attention span instrumental combo, then some country, then some post rock…recently though mostly I listen to old Latin music, it’s all about the rhythm sections.

KT: Have you been playing together for a while? How did you all meet?

JT: Dan Lowinger (guitar), Eric Baldoni (bass) and Andy Bacon (drums) were all in a band called The Love Lasers with our friend Lana Rebel (Last Of The Juanitas, Juanita Family, Broken Promises). When she moved back to Tucson, the boys wanted to keep something going. I, JT Halmfilst (guitar), jumped at the chance to play with them. We’ve
all been around the block a few times, seen and admired each others bands. It was a pretty quick fit.

KT: You guys are apparently big on 432hz!

For those not aware:

“432hz vibrates/oscillates on the principles of natural harmonic wave propagation and unifies with the properties of light, time, space, matter, gravity and electromagnetism”.

Are you some kind of undercover nerds?? What drew you to this cause?

JT: About 432hz, I heard about it a few years ago and started tuning to it in my band Thee Headliners. We were a guitar and drums duo so the transition was easy. We noticed a different feeling and quality to the sound. Different things vibrated in the room we’d been playing in for years. The difference is subtle and was physically relaxing. I convinced AA to tune this way as well citing that we shouldn’t let the Nazis dictate how we tuned. The tuning is popular in the New Age community so maybe that makes us undercover hippies. It feels good to know that we are in harmony with the vibrations of the universe when we play!

EB: It’s complete hogwash, but we love JT unconditionally so we humor him. 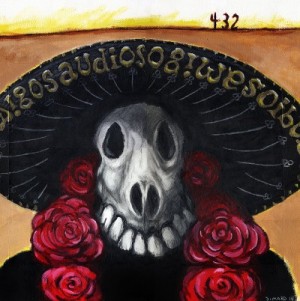 KT: What are your plans for 2015, and please say its more music?

JT: Given everyone’s busy schedules, we are adding to our personnel roster, incorporating Ben Cosloy (Bad Assets, Lord Master) on guitar and Frosty Davis on percussion and additional instrumentation. We hope to have a new t-shirt soon and would like to have an album recorded
within the year.

EB: I try to only plan things about a month in advance. This month we are playing a wedding gig…our first wedding gig ever. More people should hire us to play their wedding, we look pretty pimpin in our best digs. It will really impress your guests and convince them that you are cooler than they are…which is the goal.

KT: Will this band ever tour further east?

JT: Being a two car garage band, touring isn’t an option as of yet, but not out of the question. A van hopefully looms in our future as well. How far east are you?  KT: Northern Jersey, so it looks like my options are kinda slim.

EB: Think positive thoughts and it might happen. Hell, you should come out here and see us, why are you people always putting it on us musicians to do all the traveling? You don’t have to haul around piles of antiquated fragile musical equipment (not to mention actual flesh and blood) in vans that generally speaking, are nothing short of unregulated carnival rides in gross need of repair. KT: You sold me…now to convince the wife to travel across the country to see a surf rock band live.  I’m liking my chances.

Now for the real reason I wanted to talk to you guys:

KT: In all seriousness, is anyone in the area regarding the PORTLAND TIMBERS serious as a legit sports team??

JT: I did heard the Portland Timbers scored 3 touchdowns before the 5th inning of the sportsball meet.

EB: I tried to get a response to this from our resident sports expert Ben Cosloy…but he seems unwilling to share his opinion, which is quite rare for him…

Ben Cosloy: The Timbers are the only other pro sports franchise in PDX. In comparison to the Blazers they are an upstart club that plays its games in the heart of downtown and they have a non corporate vibe, not to mention a mascot with a freaking chain saw cutting wood rounds every time the home team scores. The Timbers are a fair to middling team that wins an inordinate amount of home games due to the raucous fans who in other walks of life stare at their shoes at concerts and drive passively. Also, their timbers Army rooting section is so rowdy and downright foul-mouthed it is not suitable for children under a certain age. Yes, the Timbers are 100% for real. KT: I like this guy!!