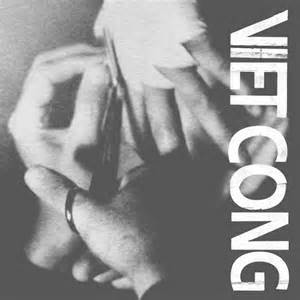 The hype machine was in full effect for the debut release from Canada’s VIET CONG. How can I describe this quartet? Cue visions of bobbing for apples; band members Matt Flegel, Mike Wallace, Scott “Monty” Munro, and Daniel Christiansen dunking their heads into a bucket of sounds and coming up with whatever will fit in their mouths (boy, that sounded a heck of a lot better in my head).

Why don’t we ignore this awkwardness and get right to it?

From looming and distorted primitive beats, a distorted cadence of the vocals, buzzing guitars, and a lighter,  synth-ey conclusion, opener ‘Newspaper Spoons’ warns the listener that this will be a chaotic ride riddled with unexpected twists and turns.

Similarly, ‘March of Progress‘ is 3 minutes of simplistic industrial beats on loop before a mandolin or sitar (Don’t ask me which.  What-just because I write music reviews, I’m supposed to know about things like instruments?) ushers in a focused, almost ‘Beatles-esque’ section (at least to these ill-informed ears), before morphing again into another sunny 80’s synth finale to complete the journey.  I appreciate it as an interesting experiment, yet I am not sure how I feel about it overall.

The repetitive new wave guitar tones and vocals make ‘Bunker Buster‘ sound as if it would fit in with Tiny Gifts-era Stone Temple Pilots, which makes it an early favorite for me.  In fact, the lyrics could fit well into Scott Weiland’s liner notes:

Go where, go where fluorescent primates teem and walk through the neon streets that stand over mutant lips on Japanese hips.”

The rest of this short release (7 tracks) continues blending genres with mostly positive results. The vibrant 80’s influenced bounce fest of the fantastic ‘Silhouettes’, the artsy, darker ARCADE FIRE influenced ‘Continental Shelf‘ (with a confusing and equally awesome video that is NSFW), and the almost 12 minute finale ‘Death’ takes so many detours that it sounds like a daunting task to listen to are fortunately amazing!  The only real ‘eh’ moment on this album is ‘Pointless Experience’ (they called it like I hear it).

An album that dips into so many different influences can quickly unravel into a chaotic mess, but VIET CONG avoids these trappings and delivers 7 tracks that herald a refreshing change from the repetitiveness of the musical landscape over the past decade. Even though their debut is not a complete home run, it leaves me genuinely interested to listen for the VIET CONG’s next evolution. 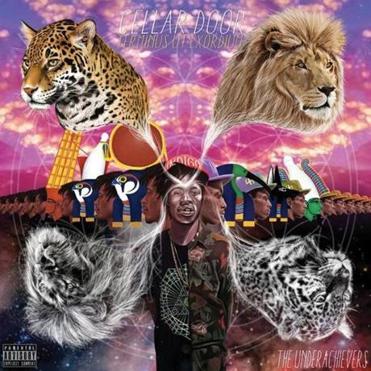 When it comes to Hip-Hop, FLOW is half the battle.  You can spend 6 minutes rapping about doing the dishes, but, as Chris Rock so eloquently put it, “If the beat is right, she will dance all night”.  Fortunately, there are those artists that attempt to offer lyrics of substance rather than a diatribe of deviant sexual acts.

With that, I present to you the psychedelic hip-hop of The Underachievers on their official debut album, “Cellar Door: Terminus Ut Exordium“.

While there’s plenty of the egotism that appears to be requisite in hip-hop (Chrysalis: “As I blow my smoke and continue my reign, Cause that royal blue blood in my veins, I’m a king”), duo AK and ISSA GOLD counterbalance the bravado with intelligent and meaningful lyrics such as,

(ironically followed up by the sage-like proclamation, “Now you all can eat dick but at least get a tip”).  Additionally, the duo  outlines their take on a model utopia in “Metropolis”, “Build a metropolis, call it Indigo Providence”.

The Underachievers spit out verses as if time is a precious commodity; there are no intros/outros or choruses to be found. Although some broader musical experimentation may have enhanced some tracks, the beats on this album are not pedestrian. The beats on “Incandescent” would fit right in on a John Carpenter film soundtrack whereas “Quiescent” and “Felicity” allow the listener to catch their breath while relaxing to denser, more melodic rhythms. On the other hand, “Amorphous”, which samples Portugal, The Man, delivers the most poppy sound on the album.

It’s apparent that someone broke out the SAT prep manual to name some of the tracks (e.g. “Sonorous”, “Chrysalis”), which is apropos, because it can feel like an exam when your trying to keep up with the break neck speed of their rhymes.  However, once you buckle down and process the commentary, it’s clear that The Underachievers provide more than just flow.